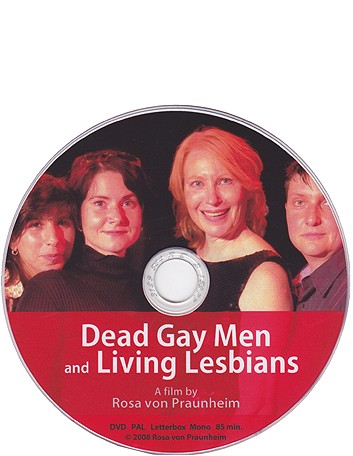 In his documentary Rosa von Praunheim creates the vision of a subculture ruled by women that is also a reassessment of the history of homosexuality and its oppression. As a result of the Holocaust and later, Aids, the male homosexual community has sustained bitter losses and, according to Praunheim, lesbian women have now placed themselves at the head of the so-called queer movement.
The female protagonists in the film represent two different generations; they also incorporate the past and present status of homosexuals in society. Berlin-based Turkish DJ Ipec moves assuredly through the club scene; journalist Manuela Kay publishes a lesbian magazine, “L-Mag”, and Laura and Silke Radosh have founded a family and belong to a lesbian mother-and-toddler group. Actor and cabaret artiste Maren Kroymann is another forward looking protagonist. She played a pastor’s wife in a successful television series names “Oh Gott, Herr Pfarrer” (Oh God, Reverend) before calmly coming out shortly afterwards.
The male protagonists on the other hand all belong to a generation that experienced the Third Reich and Germany at its most repressive point in his­to­ry. Praunheim makes use of material he himself filmed of his now deceased protagonists in order to create a series of compelling portraits. Walter Schwarze and Albrecht Becker were both imprisoned during the Nazi era. One of the men suffered from depression and was almost broken by the experience; the other, a self-confessed masochist, enjoyed his life in prison. Entertainer Joe Luga remembers the post-war era. As a cabaret sin­ger he once performed in women’s clothes before German troops on the Russian front – but it wasn’t until Adenauer’s government came to power that he found himself behind bars.