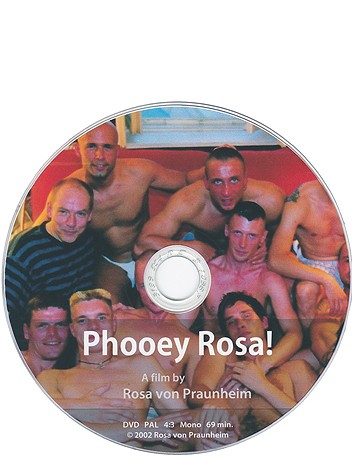 This documentary explores the tempestuous and chaotic life of filmmaker and sexual activist Rosa von Praunheim. Made by the filmmaker himself, „Phooey Rosa!“ takes the audience on a seemingly random journey through von Praunheim’s forty-plus years of mixing hot queer sex and homopolitical rage on celluloid. Like an afternoon spent looking through old scrapbooks with a survivor of a more turbulent time, the film collects scenes from his films, video clips from talk shows and clashes with political leaders, friends, lovers and co-workers. Still living with his mother and his lifelong film editor, von Praunheim relishes in his own outrageous celebrity – he camps and parades for the camera like a European extension of the Warhol studio set. It is fascinating to watch how his career, and the films he forced upon the German audience, reflect the turning tides of the acceptance of, first, the gay rights movement, and later, the AIDS crisis. A fascinating and often hilarious portrait of the „enfant terrible“ of New German Cinema.