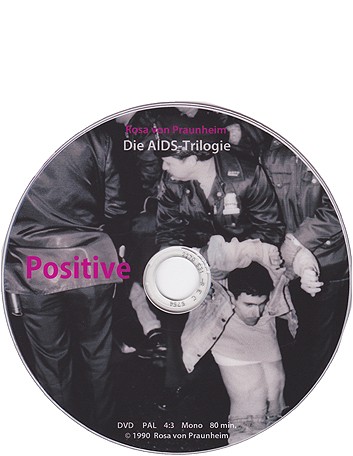 POSITIVE is the second part in the AIDS trilogy, the first part of wich was called SILENCE = DEATH and the third part of which is entitled FIRE UNDER YOUR ARSE and takes place in Berlin. POSITIVE represents the answer ot gay men living in New York to AIDS and demonstrates the great and courageous struggle of a minority which has organised itselt in the face of ignorance on the part of the state and the city.
POSITIVE shows the heroes of the AIDS movement such as the writer Larry Kramer, who initiated the first AIDS self-help group and finally co-founded the militant AIDS action group Act Up. The film presents the singer Michael Callen. who helped to organise people suffering trom AIDS and who demands the right of participation in all decisions which affect them. The major figure in the documentary is the jourrnalist Phil Zwicker, who, after the death of his lover. decided not to see his pain as a private experience but as something public, active, radical and therefore part of a large movement which transcends pure anger in the face of the 200,000 to 400.000 people infected by AIDS in New York at the end of the 90s, In 1989 there were over 20.000 AIDS patients in New York and half of them died.